In our previous blog post we teased with opportunities in the EU energy crisis. Haven’t read it yet? Take a look here. Otherwise, enjoy this post on arbitrage with multi-energy systems!

Today’s industry mostly relies on the burning of fossil fuels to generate their necessary heat. Gas boilers or CHPs are used to produce steam, hot fumes from gas burners are used in drying processes, coal is used in steel making, etc. But electrical alternatives are lurking around the corner. Some of these alternatives have existed for over decades, such as electrode boilers (7), others are only recently reaching fully mature technology levels (so called TRL9), such as industrial high-temperature heat pumps (8).

With the addition of an electrical alternative to an existing system, a so called multi-energy system arises. Upcycled waste heat by use of an electric high temperature heat pump can be fed into the process, replacing part of the gas heating. Or an electrode boiler can take over part of the steam production from the gas boiler. But when should the electrode boiler be operated or when is it more profitable to switch to gas heating?

Such a CeS can be calculated on a real-time basis, taking into account the fluctuating gas and electricity prices, as well as the system specifics such as efficiencies or technical specificities of the installation. 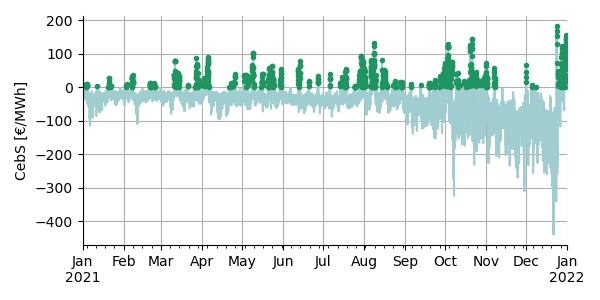 A multi-energy system creates cost-saving opportunities by switching to the least expensive energy on the right moments. To do so, an arbitrage controller, or a so called dispatch tool, is required, optimising and controlling the specific energy system. Additional revenues can be generated, or in case of an investment decision still to be made, they can bring the needed upside to push the business case above the minimal profitability threshold.

The IEA Energy Policy Review for Belgium has been updated! At ENTRAS we fully support the findings.

Read more on load shifting with flexible assets in this 3rd post on the opportunities in the EU energy crisis.

Read more on valorisation of flexible assets and arbitrage with multi-energy systems in our upcoming blog posts.

Shipping sun and wind to Belgium

Importing renewable energy and balancing the grid by power-to-X applications will be essential elements of the energy transition.

As Data Scientist, you are a key member of our project team. You will participate in every phase of the project development …

The value of flexibility in times of change

What lessons can CHP owners learn from the first four months of 2020?  Looking back at the electricity market in Belgium we …

Green Hydrogen is the new gold (without even having to dig)