In our previous blog post we teased with opportunities in the EU energy crisis. Haven’t read it yet? Take a look here. Otherwise, enjoy this post on load shifting with flexible assets!

A keyword in the energy transition is flexibility. It should by now be generally accepted that we cannot go without and that it will be the cheapest sources who will supply it. But flexibility is a broad concept and ranges in time from seconds to seasons and covers both power and energy.

Each asset has its specific characteristics and could be controlled in a dedicated manner. One of these flexibility control options is the shifting of load in time. And the price incentive to do so can come from the wholesale electricity market.

Enter the day-ahead market price volatility as measure of load shifting incentive. With the volatility being a temporal price difference, a high volatility corresponds with a high incentive for load shifting. As each asset has different abilities to shift load, no single overarching volatility index can be defined. Here the vol20 is defined as the absolute price difference between the average of the 20 most expensive hours and the average of the 20 least expensive hours within a single week. It is applicable to assets with weekly production schedules such as commercial electrolysers. 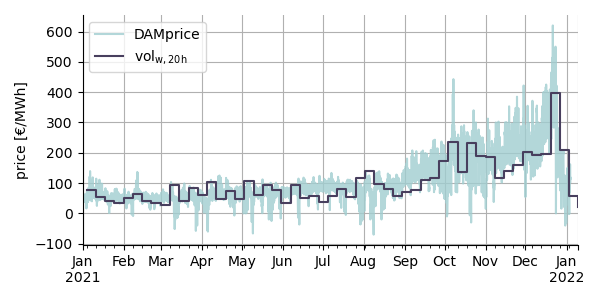 The figure above shows this vol20. It is clear that not only the average electricity price has seen a large upsurge, but that also the volatility has increased. This is due to the fact that during moments with low renewables and high demand, fossil fuel power plants need to step up, burning increasingly expensive coal or gas. During moments with low demand and/or high renewables output, prices remain low as they are not influenced by fossil fuel prices. As a result, large price differences occur between moments, hence a high volatility is seen. 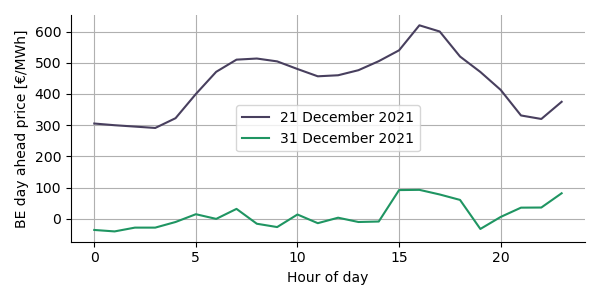 An extreme example are the day ahead prices on the 21st of December and, just 10 days later, on the 31st of December, as shown in the figure above. The average DA price on the 21st of December 2021 was 437 €/MWh, with a single hour peak price of 620 €/MWh. On the 31st of December, the average DA price mounted up to 12.55 €/MWh and negative prices were recorded for 12 of the 24 hours. The figure above visualises one of the largest price deltas ever recorded on the day ahead market in a period of just 10 days.
Having the ability to shift consumption from periods with high prices to periods with low prices can thus yield a significant energy cost saving. On top, it also contributes to the energy transition as renewable electricity is consumed directly and replaces otherwise CO2 intensive produced electricity from fossil fuel power plants.

The IEA Energy Policy Review for Belgium has been updated! At ENTRAS we fully support the findings.

Read more on arbitrage with multi-energy systems in this 2nd post on the opportunities in the EU energy crisis.

Read more on valorisation of flexible assets and arbitrage with multi-energy systems in our upcoming blog posts.

Shipping sun and wind to Belgium

Importing renewable energy and balancing the grid by power-to-X applications will be essential elements of the energy transition.

As Data Scientist, you are a key member of our project team. You will participate in every phase of the project development …

The value of flexibility in times of change

What lessons can CHP owners learn from the first four months of 2020?  Looking back at the electricity market in Belgium we …

Green Hydrogen is the new gold (without even having to dig)